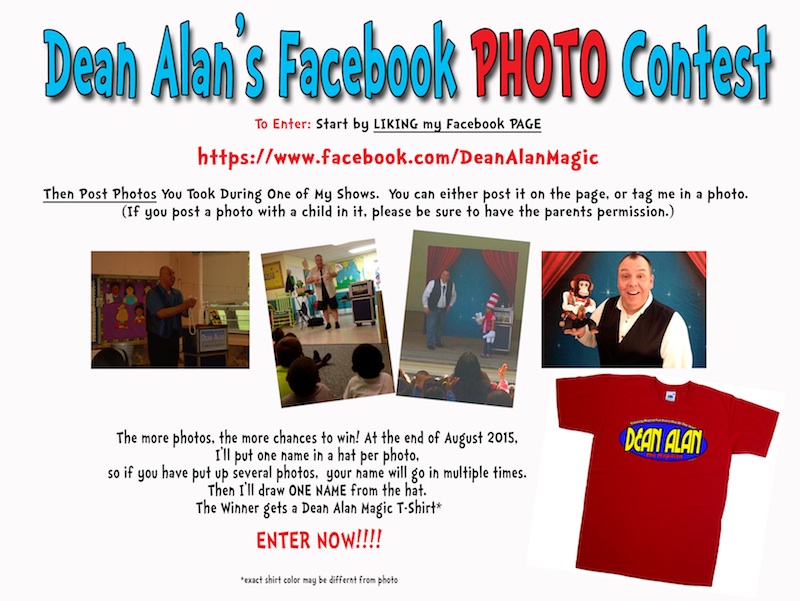 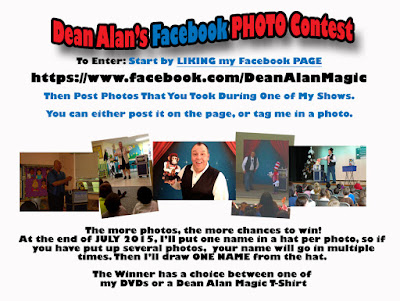 The Summer is about half over at this point, but I still have a ton of shows to do. AND, I want to alert you to my Facebook Photo Contest. I put it up on my facebook page on July 1st and so far, NO ONE has contributed, lol. It costs NOTHING! And you get a chance to win a prize. So why not give it a chance. Just go to my facebook page, LIKE the page and then post a photo or two or three from my show at your location. https://www.facebook.com/DeanAlanMagic

For those of you who want to know how Summer 2015 is going. GREAT!!!!!!! Except for one show, lol. Yes, I had one show that was a little rough around the edges. I never in my life encountered a group of kids who didn’t know what Dinosaurs were, until now. By the end of the show they sure got a good education on Dinosaurs. But it was a hard road getting through that one. When it was over, the kids kept telling me how much they loved it. So, it just goes to show that you can’t always judge the show by the reaction. This group just acted differently than 99% of other groups. But as long as they had a great time and enjoyed the Dinos, then I’m fine with that.

Seven Weeks of Shows left till Summer is over! Then BIG CHANGES in the Fall!!!!