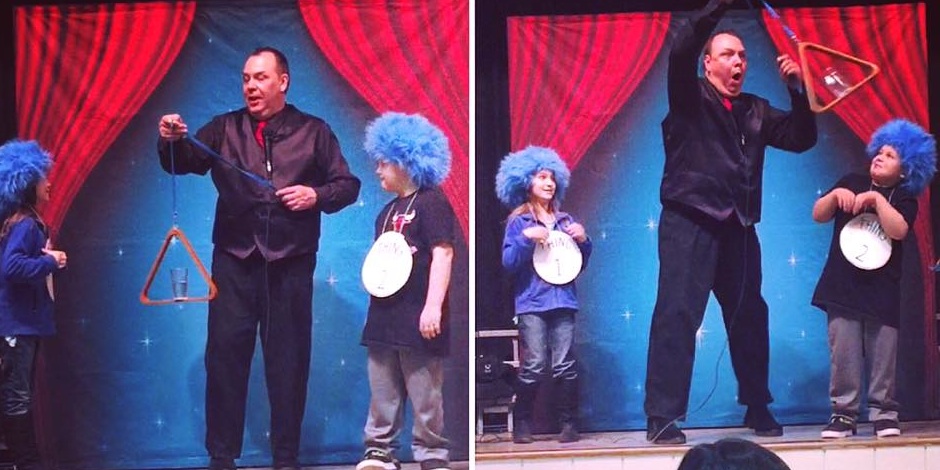 As of today I’ve presented the new Dr. Seuss Magic Show called The Seuss-tacular Magic Show more than a dozen times. It is a hit! After much back and forth, I finally decided upon the following new books and or stories: What Pet Should I Get, Too Many Daves, & Marvin K. Mooney Will You Please Go Now. I have also brought back, The Sneetches in an updated routine, The Lorax, and on occasion I do the Thing 1 & Thing 2 routine. The later is very popular with audiences. The premise is that Thing 1 and Thing 2 are always getting in trouble. So I get two kids up to play the part of Thing 1 and Thing 2 and we try out some experiments/stunts that surely must end up badly, but actually end up on a positive note!

Of all the new routines, only one has no magic at all and that is the Too Many Daves story. I simply read it, because it’s a cute story and also a short one, and has a couple funny moments to it. It works very well.

I’m still considering the Fox In Sox routine, though at the moment, I don’t know when I’ll have time to put it together. And I have a big crop of new routines lined-up for next year. Horton Hatches The Egg will be back and have a different routine from what I had done in the past. I’m also considering Gertrude McFuzz. So much for my pledge to not have any NEW Seuss shows after this year. Looks like as long as I keep creating magic to go with the stories, I’ll keep doing them.

As of right now, all of Read Across America is booked solid. The week after is all booked in the mornings, but some of the afternoons are open. I’ll continue doing The Seuss-tacular Magic Show right into April, so if you missed out on Read Across America, consider it for Week of the Young Child!